why not try this out

dating sites for over 50 nz

Of 13.3 million households in Canada, and 35.85 million individuals, the average household does not constitute even 3 people (2.6 something). A family of four, the traditional American nuclear family, is a rarity. Most Canadians, by and large, have no idea nor priority about family. The average household debt to disposable income, of two whole people by and large, is $1.74:$1 (debt payments use up all of your disposable income plus it takes away from mandatory payments like rent, grocery or utilities). That is expected to rise to $1.80:$1. Canadians are a dying breed. Home ownership makes up 9.2 million of 13.3 million households, there are only 9.2 million home owners in the nation of Canada. If you are married with kids, mostly likely you will own your home (82% odds), if single than its less than even odds (48.5% odds) and if single parent just slightly more (55.6% odds). Its getting dumb and dumber.

The most striking difference is with singles who live independently. Nearly 60% of American singles own their home to 48.5% Canadian singles who also get free health care. Where in Canada the household debt to disposable income is 174%, in the USA it is closer to 110%.

More singles in the USA own homes and that with their credit cards and other ‘borrowed on’ expenses like healthcare amount to 10% of their ‘take home pay’. In Canada with free healthcare, and no home, their debt payment, on god knows what, takes up 74% of their take home pay!

Finally, lets look at the United Kingdom as well. The debt service payments in the UK is close to 10%, like American households. Their borrowing rate is much higher than what the American consumer has to pay but much lower than the borrowing rate paid by the Canadian consumer, so that the lifestyle of the UK household is not as comfortable as an American because it costs more to borrow money, but they are as happy because they hold as little debt. Meanwhile, for Canadians they have both high borrowing costs and also high debt service payments, which is a funny thing because ‘low central bank rates’ have been all the rage in Canada. This can be because they aren’t borrowing for homes but are borrowing on short term credit cards which have a retail borrowing rate regardless of the central bank rate. The single Canadian without a home has debt service payments of 74% of disposable income on several credit cards that charge a high retail borrowing rate not pegged to the central banking rate. 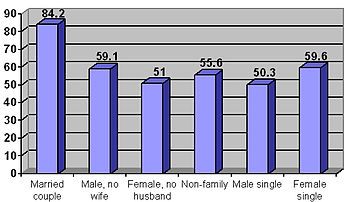